The newly built Dharamsala cricket stadium is set beneath the snow-capped Himalayas and must immediately rank right up there with the world’s most beautiful places to watch a cricket match. The Indian newspapers have been full of global-warming evidence as many parts of the country have notched up record April temperatures. We are actually only a little over two-thirds of the way through April but summer has arrived early in India and several IPL matches have been played in 45 degree heat. Think of the poor cheerleaders. And their melting make-up!

It is no wonder then that the IPL’s safari up to the foothills is being enjoyed so much by the massive body of players, support staff, camera crews, marketing and logistics people, spectators and all the other cogs of the wheel that keep the billion-dollar-a-year revenue generating machine on the road. It’s lovely up here.

Eleven kilometers up a steep hill from Dharamshala is an oasis of a retreat where the Dalai Lama and many other Tibetans live in exile from their former home. Mcleod Ganj is a hill station and former British garrison where everyone from Hindus, Buddhists, Muslims, Christians and an eclectic mix of foreign travellers (not “tourists”!) all co-exist in a cheerful and seemingly sustainable environment.

The weather is lovely. 25 degrees by day, 20 degrees by night. The air is clean and cool and the people warm and cheerful. Ah, it’s a delightful place. Chilled out hippy Israelis and European NGO volunteers sip beer and smoke pipes in little coffee shops and every second building doubles up as a cooking/yoga/massage/reiki/meditation/language/you name the self-improving holistic activity and they got it, school.

Why Modi’s men decided to schedule only two games up here is beyond me!

It isn’t an easy place to get to though. There are only two light commercial aircraft that fly into Dharamsala each day and the road from Delhi (520km) is a treacherous one that takes thirteen hours to travel by overnight bus. Booking these buses is a complex process that was beyond me but after phoning many friendly tour operators in Delhi, we were promised two seats on an overnight bus. It seemed a great relief to get on the thing, so we didn’t complain that these last two spots were in the back row.

Now at school the back row was the most desirable place to be – the cool kids also got to sit there. But as any seasoned backpacker will tell you, the same does not go for long distance buses. There are two major reasons for this. One, the seats don’t recline, thereby making the six passengers in the sleeper-bus the only ones who can’t achieve the near-horizontal sleeping position. Two, any bump or jerk felt from the maniacal driver’s over-enthusiasm on the terrible terrain is multiplied many fold in the back of the bus. On about fifteen occasions we bounced at least a foot in the air and clashed heads with each other or our neighbours. Sleeping was hardly possible and no amount of prescription drugs could have prevented the whiplash-induced pain our bodies endured. It explains the proliferation of massage centres up here.

I was neatly sandwiched between my atractive travel companion and an overweight Indian man who did not speak a word of English. He was a congenial fellow though. We smiled at each other a few times early on and he didn’t seem to mind when I half fell asleep on his belly. The bus stopped three times in the first three hours and then not once for the remaining ten hours of the journey. The sun came up just before we arrived in Dharamsala, where a few passengers including my chubby neighbour, jumped out. As we slowly climbed the final stretch to Mcleod Ganj, I remember thinking that he left in a hurry, not bothering to notion a goodbye. Having not peed for ten hours, I thought I’d put my shoes on and get my things together as soon as I saw the ‘Welcome to Mcleod Ganj, home to his holiness the Dalai Lama’ sign. But there was a slight snag.

I could only find one of my fine brown-leather Sebago docksiders – the perfect shoe if you prefer travelling with only one pair. There was another shooe around. A cheap, plasticy-leather slip-on. It was my size and it was smelly. It was clearly a man’s shoe and the only four men in the viccinity were Israeli post-military-conscription-finding-themselves-Jesus-sandal-wearing hippies. I was left with my right shoe and his left shoe. The fatty had stolen my fine shoe! So until I could get some Jesus sandals on my paws, I was the laughing stock of the Himalayan foothills! 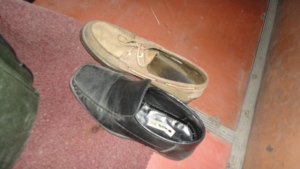 The story behind the new stadium is an interesting one. I interviewed an official at the Himachal Pradesh Cricket Association who revealed that the ground is part of the BCCI’s plans to improve Indian performance on quick pitches and at altitude. The hill station will be used as a training ground for Indian teams before they tour places like Australia and South Africa. I found all of this rather fascinating and I can’t blame the grand plan. What a lovely place for a training camp and what a lovely fast wicket the groundsman has knocked up.

The two matches here produced high-scoring thrillers. In both instances the Kings Punjab XI lost the toss, were sent in to bat on what promised to be a lively track, and then smashed big scores. Their 174 for 3 was chased by the Deccan Chargers in the final over and then two days later their 192 for 3 was chased by Chennai, also in the last over. The 20 000-strong crowd seemed to have fun, even if many of them knew almost nothing about cricket – for over half of the crowd, the match would have been the first they had ever attended.

It has been a fun couple of days in this obscure paradise. I caught a glimpse of the Dalai Lama himslef, when he attended the second match and bowed at everybody in his lovely red robe. Cricket365’s Tristan Holme had recommended “the best value hotel in India”, the Pink Palace, a shockingly pink building where the most spacious and comfortable double room with a wonderful hot shower, private balcony and breath-taking view of the snow-peaked Himalayas sets you back 10 US dollars a night. I did a Tibetan cooking class with a refugee who twelve years ago took eight days of buses and then hiked 28 days over the Himalayas to get to India. He hasn’t been home since and teaches two private cooking classes a day. The lesson took two hours, cost the same as a meal in a restaurant, and we ate up the fruits of our labour for supper.

I took a marvellous video clip of Adam Gilchrist, flanked by rifle-wielding policemen and mobbed by hundreds of Indians and Tibetans (who had never heard of him but figured he must be famous to require an armed escort), walking down one of the only two roads in Mcleod Ganj. And then I spotted a familiar face. No policemen, no mobs, just Billy Bowden looking at crystals and trance-music festival hippy garb in a Mcleod shop. I never bother a player for a picture or autograph, but this was too good to resist. I called the barber, who had just shaved my face clean, out from the shop next door and asked him to snap the world’s most eccentric ump and me in the most unlikely of places. And what a good sport he was – I didn’t even have to ask him to bend his index finger! 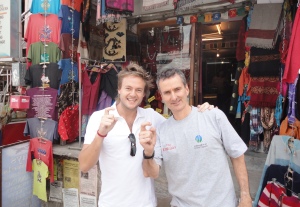 Before I sign off I have a funny tale to share. It’s nothing to do with cricket or the mountains but as it’s about Adam Gilchrist and as I’ve mentioned him here, I think you’ll let me tell it. About ten days ago when the Deccan Chargers played a home game against Bangalore in Nagpur, Gilchrist ordered a curry in the restaurant of his five star hotel, the Sun and Sand near Nagpur’s airport. When it arrived, he had a bite or two before discovering a cockroach muddled in the masala! He immediately asked the waiter to send for the manager, but the waiter, terrified of getting in trouble, protested that the manager was not around. When Gilly, who it is hard to imagine angry, spotted the manager on the other side of the restaurant, he ran over to call him. But while doing so, the waiter took it upon hiself to pick up the offending insect and eat the evidence!

This article appeared on Cricket365 in April 2010, towards the end of IPL3.